Have you ever hesitated to take your before-picture because you truly didn’t believe there would ever be an after-picture?

Over the past few years, I have helped a countless number of people begin their weight loss journey.I ALWAYS always ALWAYS urge people to take their BEFORE picture and record their BEFORE measurements. Many people are reluctant.
Maybe it’s because they don’t foresee that there WILL be an AFTER picture.
Maybe they are scared of what the picture will show.
Maybe it’s because they assume that they HAVE to share it with the world or that they have to take the picture half-clothed in a bikini or sports bra and itty-bitty shorts.
Maybe it’s because they don’t believe that they have the ability to have a jaw-dropping transformation that they will be proud of.
Maybe they make excuses so that they don’t have to face that awkward moment of standing there totally vulnerable in front of the camera, like “I don’t own a camera.”; “I don’t have someone to take my picture.”; “I’ve never liked pictures.”, etc.
(You can see the looks on the faces of the Beachbody Challenge winners that are posted each day on day 1, that they are annoyed, embarrassed, and very doubtful, but then you can see the changes between that person in their before picture to who they are at the end of their program. They stand taller, they are smiling, and you can see the confidence and pride seeping out from that picture. You can even see it in my face in my before picture. I wish I had of known there would be a after-picture, because I would’ve dressed differently, smiled, stood taller, but it is what it is.)

But I CANNOT stress enough as to just HOW IMPORTANT it is to do this.

So many people are solely focused and even OBSESSED as to what the scale says.

The scale is NOT the most accurate way to gauge your results. The # on the scale can fluctuate drastically from day to day.

It is common to get hung up on the number that you see on the scale, or to weigh yourself everyday. While weight loss does entail an actual drop in your body weight, your scale will not alert you to changes in your body composition. Muscle tissue is denser than fat tissue, and, therefore, muscle weighs more. Focus on changes in your measurements rather than on the number on the scale.

Many times people, even after losing a significant amount of weight still look in the mirror and see that person they were on day 1. It is not until they look at a side-by-side-comparison of themselves on day 1 vs. current that they see the changes that have taken place.

Another reason it is IMPORTANT that you get a before picture taken is because whenever you complete a Beachbody at-home-fitness program, you can submit your before and after photos to be entered in the Beachbody Challenge Contest where you become eligible to win $500 up to $100,000 (my good friend Richard Neal won $100,000 in June 2012) and you also will receive a FREE T-shirt as a token for your hard work.

Trust me… even if you can’t see the light at the end of the tunnel NOW, at the end, you will WISH you had of taken that before picture.

Check out my friend Michelle Breneman Hall‘s progress pictures.
She reached out to me at the end of 2013 and started drinking Shakeology® and has participated in several of my FREE 30 Day Challenge Groups, has completed Hip Hop Abs and is currently doing Focus T25 and has only lost 5-6 pounds, but has dramatically changed the shape of her body, dropped 2 sizes, has changed her eating habits, made some awesome friends along the way and is in the best shape of her life just 8 months after having her 3rd child. 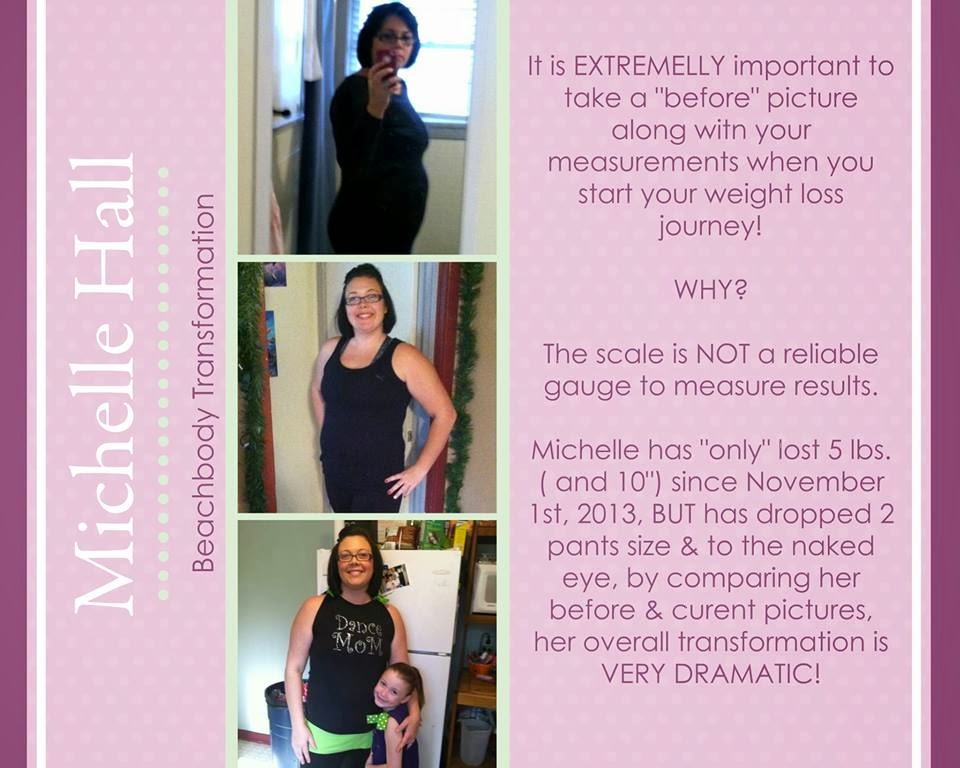 I share with you the importance, here in this video.